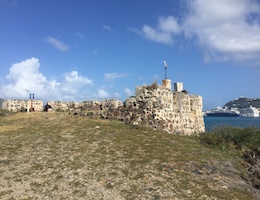 Located near Great Bay and Little Bay, it was soon captured by the Spanish who occupied it as a military post until 1648. The fort was built by the Dutch in 1631.  In that year the partition agreement was signed by the Dutch and France. The island, and therefore the Fort, changed hands many times between the Dutch Republic, Spain and France.

Now, the fort is small, and in a dire state of repair, but still worth visiting. There are a few rusting 19th century cannon in place, and several informational signs.

Looking over at Little Bay and Great Bay, Fort Amsterdam is definitely worth visiting as its one of the few monuments that St Maarten still has. 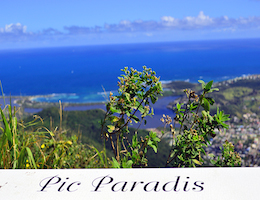 A great Saint Martin hike is from the Loterie Farms to Pic Paradis. In itself, Loterie is well worth a visit.

Find good swimming, fine dining treehouse style, zip lining, nature programs and good hiking trails. There's also a longer, more gradual trail.  Depending, the round trip is up to three and a half miles long.  You're in lush forest most of the way. Along the summit are separate views to the west and east. The latter is especially fine, offering a beautiful panorama from Orient Bay to Philipsburg.

Loterie Farms is located along a small road between Marigot and Grande Case.  And while it is possible to continue by vehicle almost to the top, I much prefer to start at Loterie.  It's a neat place. With Great Food